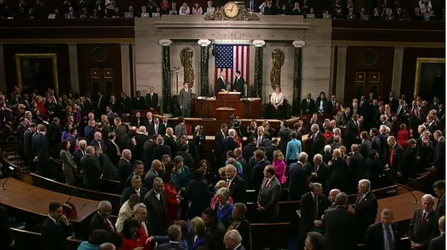 ​​
​My research examines the interactions between democratic leaders, public opinion, and domestic institutions in the context of military interventions. Employing a combination of quantitative and qualitative methods, I investigate the extent to which leaders are able to manage public opinion, the conditions under which public consent constrains military action, and the implications for democratic accountability. In addressing these questions, my work highlights the dynamic nature of democratic institutions. Rather than acting as static constraints on the use of force, the strength of these institutions varies based on official rhetoric, the character of domestic coalitions of support, and the moral content of the issue.
Publications
"You and Whose Army? How Civilian Leaders Leverage the Military's Prestige to Shape Public Opinion." with Michael R. Kenwick. 2022. Online First. Journal of Politics.
How does the military's popularity influence leaders' domestic leeway in foreign policy? We argue that leaders have strategic incentives to publicly leverage military prestige because doing so builds support and deflects blame for decisions regarding military force. Rather than shifting power towards the military, these references primarily empower leaders. At the individual level, a survey experiment varies the identity of presidential advisors and the outcomes of a foreign policy decision. References to military advisors increase approval for both action and inaction and insulate leaders from the costs of failure. At the elite level, we analyze presidential speeches to show that leaders reference military elites more when discussing negative issues in foreign policy and less when discussing positive issues. A detailed analysis of speeches surrounding the 2007 Iraq Troop Surge further supports our expectations. Leaders have and act upon incentives to politicize the military to loosen domestic constraints on foreign policy.

"Finding the Water's Edge: When Partisanship Influences Foreign Policy Attitudes." 2021. Online First. International Politics.
In moments of international crisis, U.S. presidents have historically rallied public support by evoking the national identity. Affective polarization undermines the salience of national identities and threatens to carry domestic divisions across the water’s edge. Does affective polarization reduce individuals’ support for military action? When is polarization most likely to extend beyond the water’s edge? I argue that the foreign policy consequences of affective polarization vary across intervention contexts and individuals. Using a series of ten survey experiments conducted during the 2016 presidential election season, I investigate the presence and stability of partisan gaps in support across security and humanitarian interventions. A second survey experiment directly manipulates negative partisanship, the president’s party affiliation, and the intervention scenario. The results indicate that negative partisanship can undermine the president’s ability to generate support for intervention, but context matters. Humanitarian interventions provide some insulation from the effects of affective polarization.​

"Limited Spin: When the Public Punishes Leaders Who Lie about Military Action." 2021. Journal of Conflict Resolution. 65(2-3): 283-312. https://doi.org/10.1177/0022002720961517
Presidents have significant incentives to mislead the public about the use of force. Under what conditions are members of the public willing to hold presidents accountable for what they say about military action? This article examines both spin and deceit at the micro-level to clarify when individuals are most likely to punish presidents for misinformation. Three survey experiments demonstrate that presidents incur political costs for misinformation, even when operations succeed. Introducing partisanship into the analysis then reveals that not all individuals are equally likely to punish all presidents—Republican leaders primarily concerned with their base have the most leeway to mislead. The findings highlight the dynamic nature of democratic accountability and domestic constraints on military force. Rather than a static institutional feature, the strength of accountability can vary across presidents and electoral coalitions. Additionally, the results show political costs are not limited to large-scale deception—even spin generates backlash.
​
"The Power of Humanitarian Narratives: A Domestic Coalition Theory of Justifications for Military Action." 2020.  Political Research Quarterly. 73(3): 680-695. https://doi.org/10.1177/1065912919852169
Conventional wisdom assumes the best way to mobilize public support for military action is through the lens of national security. Humanitarian justifications provide a helpful substitute when U.S. interests are not at stake, but are less reliable. However, U.S. presidents have provided humanitarian explanations for every military intervention of the post-Cold War period. What, if any, power do humanitarian justifications have in security-driven interventions? The article answers this question by developing a domestic coalition framework that evaluates justifications in terms of whose support matters most in the build-up to intervention. Survey experiments demonstrate that humanitarian narratives are necessary to build the largest possible coalition of support. However, presidents risk backlash if they stretch humanitarian claims too far. Data from 13 waves of Chicago Council surveys and an original dataset of justifications for U.S. interventions confirms that humanitarian justifications are a common and politically relevant tool. The findings challenge both the folk realist expectation that the public responds primarily to threats to its own security and the constructivist tendency to limit the power of humanitarian justifications to cases of humanitarian intervention. Instead, humanitarian justifications are equally, if not more, important than security explanations for mobilizing domestic support, even in security-driven interventions.
Paper

"Mechanisms of Morality: Sources of Support for Humanitarian Interventions" with Sarah Kreps. 2018. Journal of Conflict Resolution. 62(8). 1814-1842.
Humanitarian interventions are a common aspect of U.S. foreign policy. Policy-makers acknowledge the importance of public support for intervention, but scholars remain divided about the extent and basis of that support. Using a series of survey experiments, we evaluate attitudes about humanitarian interventions, assess whether the public supports these interventions for instrumental or moral reasons, and test which aspects of morality are most salient. The findings indicate that interventions addressing humanitarian crises boost public support, with the basis of that support residing primarily in normative contentions that the U.S. has a moral obligation to protect civilians. This research advances understandings of morality in foreign policy, mediates debates about the determinants of public attitudes--including when the public makes moral rather than prudent decisions about intervention--and has important policy implications. It suggests a morally-motivated public may be more likely to support risky humanitarian interventions, increasing the likelihood of using force.
Paper | Supplementary Appendix | Replication Materials
​
Related Monkey Cage Coverage: "Americans feel a moral obligation to help humanitarian victims (like those in Syria) with military force"

"Teaching Students to Engage with Evidence: An Evaluation of Structured Writing and Classroom Discussion Strategies." with Steffen Blings. 2017. Journal of Political Science Education. 13(1): 15-32.
In their transition to college, students often struggle to identify and make connections between the main arguments, evidence, and empirical findings of articles from academic journals commonly assigned on political science syllabi. Which active learning techniques are most effective for teaching students to recognize and evaluate social science evidence? To address this question, we conducted an experiment with students from two first-year writing seminars in political science. Students were randomly assigned to either an in-class writing activity or a group discussion, both of which required them to summarize an article's use of evidence. We find limited evidence that group discussions are more effective for teaching students to engage with evidence.
Working Papers

Combining content analysis, survey experiments, and archival research, I focus on the domestic audience to argue that humanitarian justifications are necessary to build a coalition of support from a public with diverse foreign policy beliefs. In particular, humanitarian claims resonate with individuals who are unconvinced by security justifications and are otherwise active opponents of intervention. As a result of their broad appeal, presidents have an incentive to emphasize humanitarian claims as often as possible; however, the same constituents that make humanitarian justifications necessary also constrain their use. Specifically, individuals with cooperative internationalist values are uniquely persuaded by humanitarian claims, but punish leaders who misuse humanitarian explanations. The findings have implications for whose support matters most in the build-up to military interventions and the conditions under which presidents can use moral appeals to obtain this support.